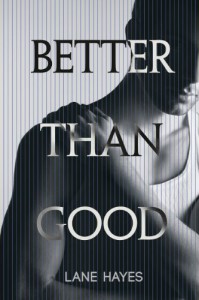 I thought this was a GFY, so in that aspect, I was let down (Matt is not out, but he had been with a guy back in college). It is a sweet story without dramas, and although I did not fall in love with both Matt and Aaron, they were very cute together. Matt, the handsome jock law student, and Aaron, the effeminate-enthusiast-pretty-out-of-the-closet gay guy.

I liked that, although Matt is "not into guys", he is immediately smitten with Aaron, as soon as he sees him dancing one night. He can't take Aaron out of his head the following days. What I did not like? That Matt had a girlfriend. He is coward enough not to break up with her first before kissing Aaron and receiving a blow-job. Kristin did not deserve it.

Taking aside that MAJOR pet peeve, the story was good. Matt is kind of obsessed with Aaron and it was nice to read how happy he was only because of a text message from him. Or how jealous he was because of an old ex-lover. Or how desperate he acted some times because he wanted to be with Aaron. It was so good to read a "straight" guy not having seconds thoughts or be too confused because he liked a guy. Sure, it was not easy for him to tell everybody but he was not ashamed of his feelings (yatta!).

And Curt, his gay friend, was adorable with this habit of putting quotes marks in his phrases.

I never pay attention to the lyrics of a song if I am not fan... so now that I've read "Your Song" I found it so sweet <3

Aaron was the typical effeminate guy: likes to dress up, putting on lip-gloss (Matt hated to kiss Kristin when she had it, but it was fine with Aaron... hmmph); his taste in music, movies, etc. Oh, and his friends are all good looking, of course. Hmmph...Let's say I am not really into stereotype.

Good mm romance, not smutty but with some hot scenes.