How to Repair a Mechanical Heart 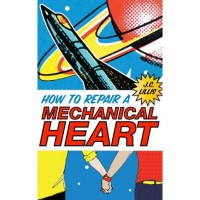 I have to admit I was not hooked in the first couple of chapters. Seems I don't have luck in the mm romance department. I did not understand Brandon, and Abel did not seem the right guy for a romance interest. I did not feel their chemistry, and besides, Abel was already dating someone else and seemed very much in love. In my MM romances, I don't like a third person involved. I don't mind in MF, but in MM, it should be the 2 of them only. Bah, a very old-fashioned thought, but I can't help it.

However, there are 2 things that made liked this book a lot:

I know, who would have thought that girls would be more interesting than the 2 main boys in a MM romance? First, were the CadSim fangirls, with their theories about the possible love story of the popular geek show, a Captain and a robot. But then, the girls that stole the show were the ABANDON fangirls, and their leader, hey-mamacita. Girls who like to read fanfic will definitely identified with this fandom.

I ship for 2 non-fiction characters, Guy A and Guy B, so I could identify easily with the girls. Or should I say I 'used' to ship for them? Their "story" is totally over. Anyway, and this is a true story, there used to be a "Leader" for this OTP, a real hey-mamacita. Her nickname included the portmanteau of the couple: XlovesAB. She filed a lot of "evidence" of their 10-year-relationship: pictures, videos, interviews, etc. She wrote fanfics, she was banned from Youtube but she kept trying again and again. And she also promoted their careers. Anyway, like a year ago Guy B tweeted her to thank her for all her support over the years!! Can you imagine that? Guy B knew she was shipping for them and he thanked her! Of course, he was thanking her for supporting his career, but a fangirl can dream, right?

It was not easy for Brandon to have a relationship. Every time he was having "impure thoughts" he had his priest's voice in mind. Having been raised in a Catholic family it was hard for him to feel free as a gay man. The fangirls helped at least. I think the author approached the subject very realistically. Catholicism is certainly harsh on this. And Abel is very sweet trying to fixed this damaged guy.

All the geeks and their TV show was fun. I liked Brandon and Abel relationship; they bonded and became closer until the inevitable happened. They had fun doing fanservice (we girls loooove fanservice). And the comments! Hilarious.
Tweet
3194 BOOKS