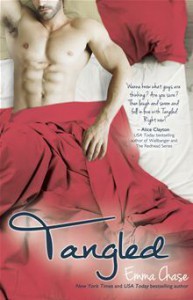 For about 65%-70% the book was amusing. It is narrated from the POV of a man-whore, so that was refreshing. A modern Don Juan de Marco. Drew Evans is having constantly one-night stands with, what it seems, bimbos. At least most of the girls. Then, one night, he meets this beautiful girl who rejects him. He cannot stop thinking about her. And then, surprise! it turns out that his gorgeous girl is his new co-worker.

While there was high sexual tension between them, I thought Kate was a good heroine: smart, witty, who liked to hit back when it was necessary.

Then comes The Weekend. It is when Drew finally has Kate in his department, where they remain together for the whole weekend. I admit it, it was pretty hot. They are doing constantly, everywhere, every position, etc. But then comes that moment where I realize Kate is too.. naive maybe? (still don't know what word to use) to be smart.

She asks him to do it without protection.

I get it. She is in love. It is a huge step when you trust this person. But we are talking about Drew here. Kate knows he likes to sleep with women randomly. She knows he is a man-whore. So how the hell could she do that?

And once their perfect weekends ends, and they come back to the real world, and the ex-boyfriend shows up to get his ex-girl back, things go downhill.

We have the Misunderstanding. Drew acts like a jerk. Kate is hurt. Drew hides from the world for a week. Then realizes he was wrong. He asks her forgiveness. But of course, she cannot forgive him. She distrusts him. They "don't belong together". That's right. The most cliche argument ever used in a romance book.

Drew will do anything to get her back. Anything. Some of the things he does are kind of sweet. Others are completely annoying. I cringed when it comes The Notebook's reference. Please, don't you ever use this amazing movie as a reference. Noah doing it or behaving like he did was good because it was him. Re-using his tactics...

I found the book pretty entertaining. The problem was, it was funny, but not very funny. Drew was charming, but not completely charming. The POV was enjoyable, just not witty. If it was a movie, I would have liked it alright. But in a book, I want more originality. Even when it comes to the characters. Like, Kate has an overprotective BFF. Drew has two nice buddies, one of them is his brother-in-law. Drew is crazy for his little niece. The ex-boyfriend is selfish and immature. All of them, I’ve seen them in so many books and movies. They were OK, but I wanted more. It was disappointing, to say the least.

Although I did like it when The Bitch shows up for the first time. And that it turns out to be his older sister.

Overall, Drew was fine. I still don’t get why so many female readers are crazy about him. Because he was hot? Rich? Over-confident? Because he certainly was an asshole regarding women. He only sees them as some potential f***. Until he falls in love of course.